The next generation of UAV

Cinematographers know that when conditions aren't right, capturing those crystal clear aerial shots is difficult. Wind leads to either greater cost in post-production, or to cancelling shoots entirely. Vortec is fixing this problem.

The directional propellers on Vortec UAVs allow thrust in three dimensions. This lets the craft move sideways without rotating the body, making lateral motion faster and more responsive. The craft stays flat and level at all times, reducing payload movement and wind profile.

Additionally, the field of view can be expanded by placing the craft at an angle while hovering. Shoot the horizon. Pan from the ground into the sky. Experience true flexibility. 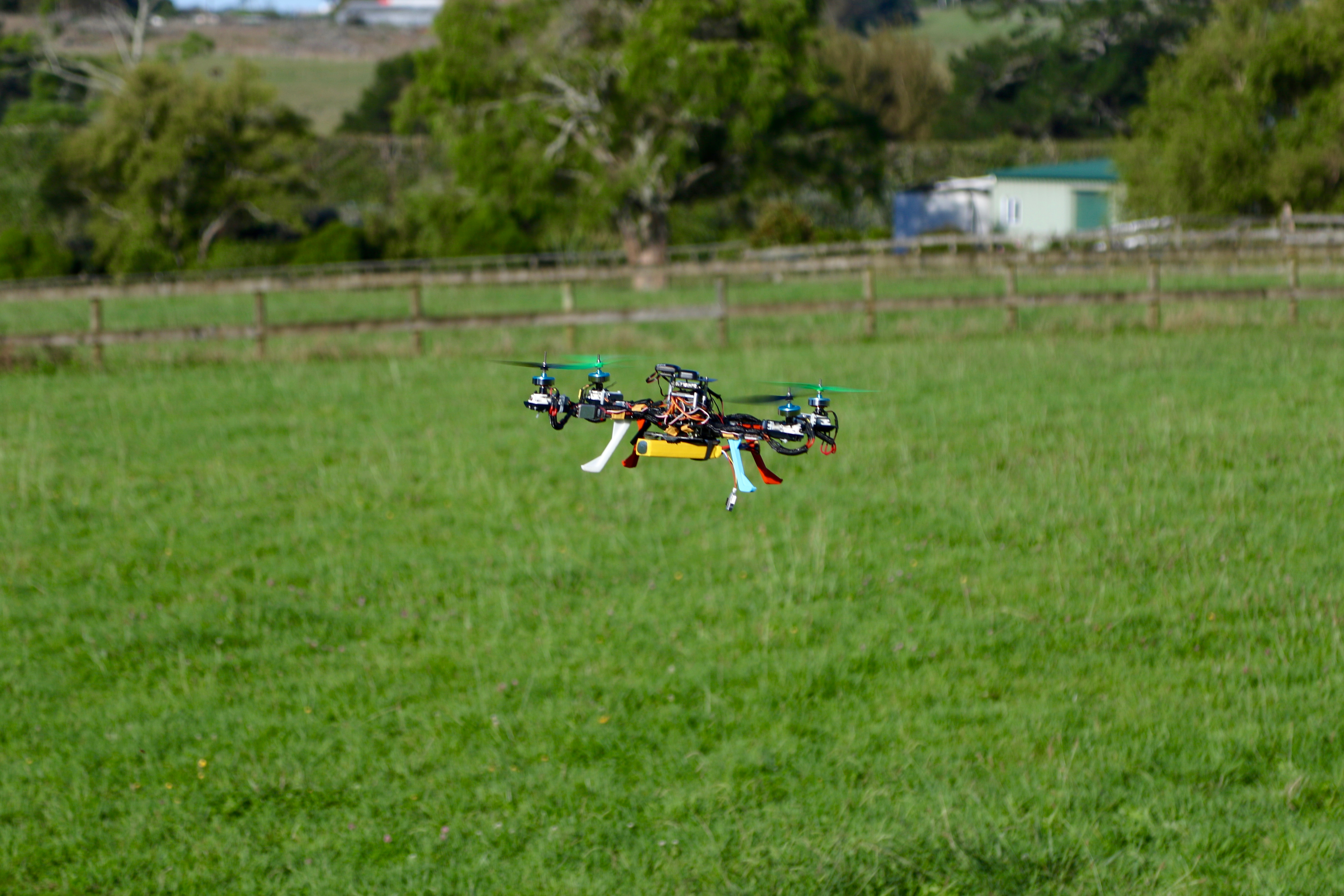 The SkySlide is a quadrotor, re-imagined with thrust vectoring technology. Each of the motors can be rotated by up to 30° in each direction, allowing the craft to rapidly change its lateral position, particularly in response to wind effects. The Vortec Skyslide is able to hold a position within 1m in 30mph of turbulent wind. The SkySlide also offers angled hover up to 25° in each direction.

Designed for a GoPro or similar-sized camera and gimbal, the Skyslide is designed for anyone from enthusiasts to lower-end professional cinematography applications. 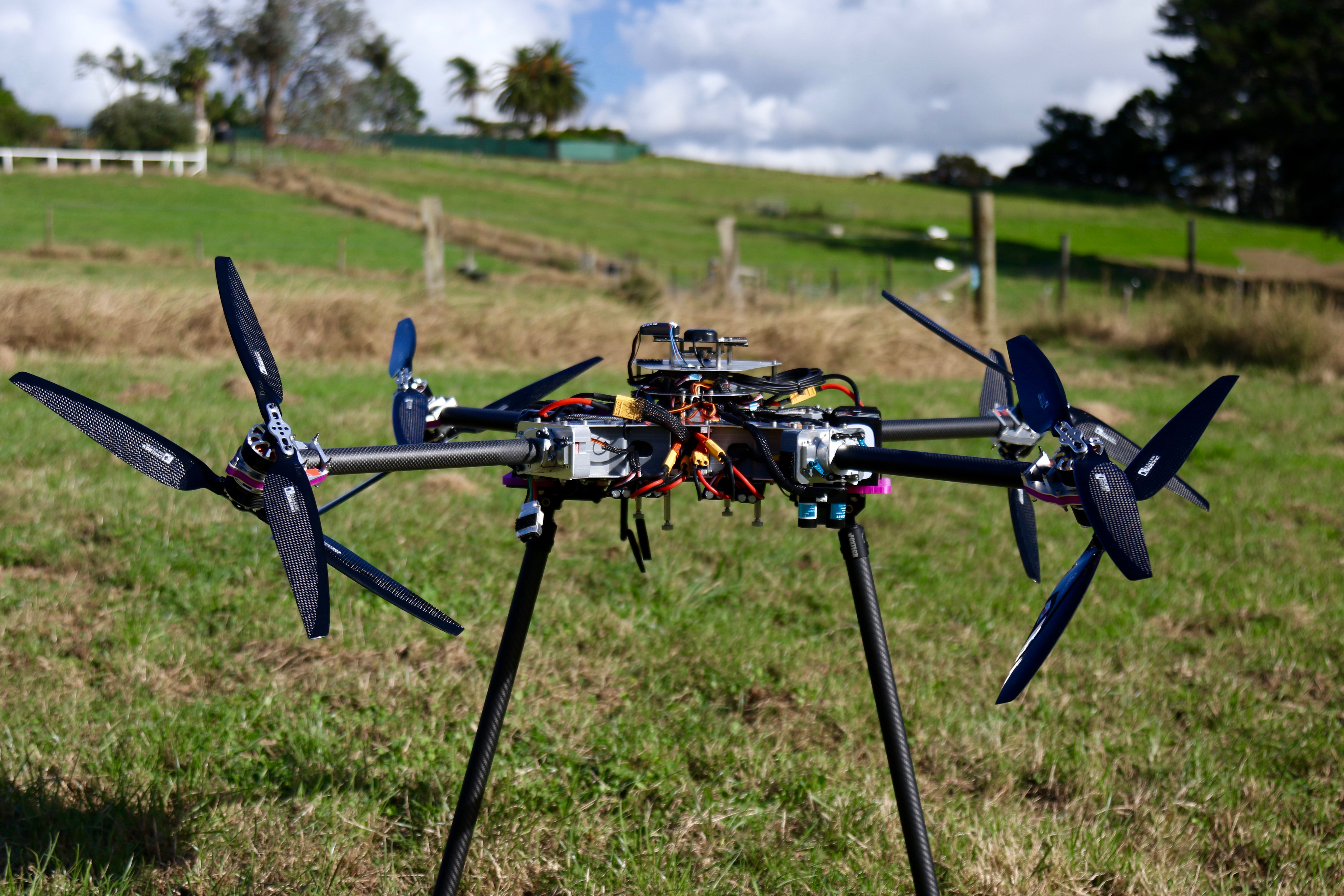 The StormTamer is a professional grade UAV, specifically designed to shoot incredible images and video, even in bad conditions. Thrust vectoring technology allied to a powerful X8 configuration allows extremely rapid lateral response to gusts. Angled hover up to 25° is currently supported.

The StormTamer can carry a 3 axis gimbal and cameras up to Red Epic and Canon 5D size. With an 8kg payload and flight times between 10 and 25 minutes, the StormTamer is optimised for screen industry applications.

Vortec, a New Zealand company, beat 80 other entrants in a competition to design and build the next generation of drones. By winning the C-Prize, Vortec has been recognised by the New Zealand government for breakthrough technology in the screen industry.

The C-Prize competition challenged teams to design and build a prototype UAV (unmanned aerial vehicle) that could overcome three limitations in their use for film: strong wind, rotor noise and the inability to track moving objects.

New Zealand innovators and entrepreneurs entered the competition to overcome these three challenges and create the next generation of UAV technology. Their products were judged by representatives from UAV companies including Aeronavics, cinematographers from the New Zealand Film Commission, and independent aerial camera operators. Ultimately the Vortec range was shown to solve the biggest problems with current approaches to aerial cinematography.

The New Zealand screen industry’s reputation for cutting-edge film-making is acclaimed worldwide. Combined with our open airspace and progressive regulations, New Zealand is the perfect location for innovators to commercialise world leading UAV technology for the film, media, and gaming industries.

Nishaad is a Mechatronics engineer with experience in developing autonomous object following drones. He is currently working full time for Vortec UAV Ltd.

Ben is a Mechatronics engineer, with experience in Aviation and Quality Assurance. He is currently working full time for Vortec UAV Ltd. (that's us!)

Simon is a Mechanical engineer specializing in Aerodynamics. He is currently studying towards a PhD at the University of Cambridge.

Ryan is an Embedded Systems engineer specializing in hardware and software design. He is currently working towards a PhD at the University of Auckland.